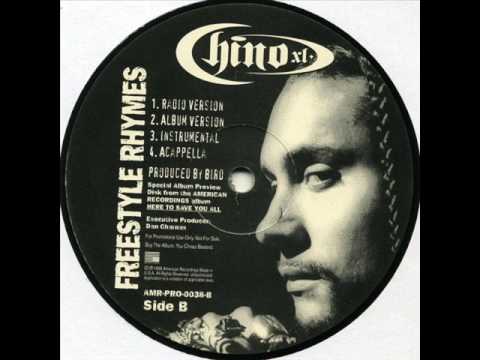 [Chino XL]
Yeah, yeah "Fuck that!"
Fuck out my face is your best bet
Your career is George Burns I can't believe you ain't dead yet
I show more blind rage
Than Stevie Wonder and Ray Charles wrestling in a steel cage
("Yo this nigga's crazy!")
I got an artist losing their limelight like Mike Bivins
Bitches flipping their wigs like Faith Evans
Reject my single I ain't mad at it
Like O.J. getting married again, I'll takes another stab at it
I'm tearing you out the frame like wedding pictures after divorce
Petrol like you dropped the soap in the towel with Luther Vandross
I'm porno like ads from Calvin Klein, believe me
You ain't no rapper you just play one on the fuckin TV
You on the road you goin gold that's what your label shoutin
You couldn't outsell UTFO's reunion album
What could I say to get my point across?
Rap don't need that ass like Large Professor don't need Main Source

I'm lethal -- I gets medieval with a blowtorch and pliers
End your future before it starts like Len Bias
Just slit your throat let Chino XL be your oxygen
I write more "esas"/essays than incarcerated Mexicans
Tap ass with Speed like David Geffen tapped Keanu Reeves
Play Superman get rhyme styles paralyzed like Christopher Reeves
Billy Bathgate flow, that could ca-st-arate Cas-t-tro
Ill as Reagan's prostate for the tri-state when I let my, SOUL, GLOW!
That's what I'm on
From prom date rape to the back break of Gloria Estefan
I'm making moves like a stick Pinnochio, no strings on me
And go for broke like James Brown dancing for alimony
I talk shit all day and drink wine like a catholic priest
("Aiyyo nigga kick that freestyle about the punk police")
I give N.Y.P.D. Blues
I shot Magnum P.I. now I'm a Cops Current Affair on the ten o'clock news
Kidnapped Hawaii Five-O
In 48 Hours they called Reggie Hammond Ace Ventura made me laugh I let him go
Charlie's Angels came with some police woman shit
Johnny Depp seen em on 21 Jump Street suckin Robocop's dick
Starsky and Hutch gangbanged Cagney without Lacey
Her lesbian lover fucked TJ's Hooker on New York Undercover
Call me L.A.P.D. cause I abuse my privledges
Victorious to scrimmages, beat your black ass til it hemorrages
Vibe to my dark thoughts
Rappers run from me, like they Mark Fuhrman at the Million Man March

Niggaz got beef? Come on let's set it off
Talent like mine is rarely seen like handicaps havin intercourse
Niggaz wanna floss in, celebrate, lyrically won't elevate, they flimsy
I'm breakin out my shell like Mork and Mindy
My style won, drop an album, you cherish it
My name ring bells like Girl Scouts when they sellin shit
Metaphors, fly out, for brothers who, puff the lye out
Put your gun away, he'll shoot your eye out!
I'm an artist and they starvin me
They dangle me off the balcony like Big Red in The Five Heartbeats
Respectin the streets is my first concern when I rock
It's hot like Bob Marley's fingertips from reefer burns
I ride syllables like white boys in Mustangs
Lyrics sharper than RZA's gold front fangs
You better call God if you wanna do me (freestyle)
You know you gonna die like a black man in a horror movie


Freestyle Rhymes Lyrics are the property of the respective artists, writers and labels. These lyrics are provided for eduacational purposes only. Please buy the song if you like them.