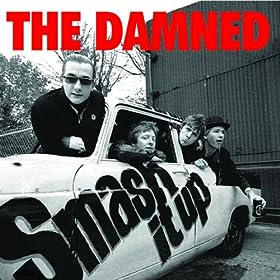 Is she really going out with him?
Ah!
I gotta a feelin' inside of me
It's kinda strange like a stormy sea
I don't know why, I don't know why
I guess these things have gotta be
I gotta new rose, I got her good
Guess I knew that I always would
I can't stop to mess around
Like a brand new rose in town
See the sun, see the sun it shines
Don't get too close or it'll burn your eyes
Don't you run away that way
You can come back another day

I never thought this could happen to me
I feel so strange, so why should it be
I don't deserve somebody this great
I'd better go or it'll be too late, yeah
Ah!

Written by guitarist Brian James, 'New Rose' was issued on the Stiff Records label. The B-side was a cover of The Beatles' hit 'Help!', performed about twice as fast as The Beatles's original version. Both songs have since become staples of The Damned's live shows, and appear on various compilations, and 'New Rose' was included on the group's full-length debut 'Damned Damned Damned'.


New Rose Lyrics are the property of the respective artists, writers and labels. These lyrics are provided for eduacational purposes only. Please buy the song if you like them.